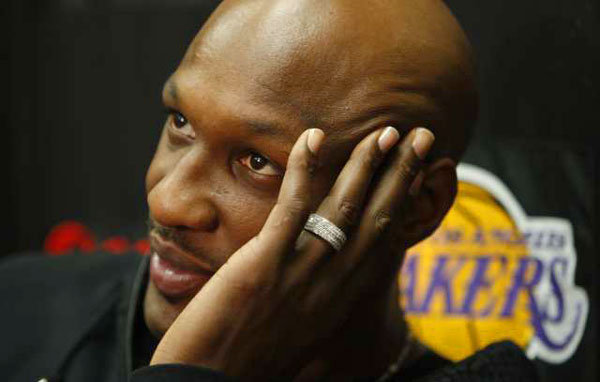 Millennial News (LAS VEGAS) – This is not your normal Kardashian update as two-time NBA championship winner, Lamar Odom, fights for his life at a Nevada hospital. Odom,35, was found at 3:30pm on Tuesday lying in bed on his side with a pinkish fluid coming from his mouth and nose. According to authorities, Love Ranch employees told 911 dispatchers that Odom admitted to using cocaine at the brothel on Saturday, and took 10 herbal supplement tablets over the three days spent at the Love Ranch.

According to the manager of the brothel, TJ Moore, Odom asked to be picked up from his home in Las Vegas and dropped off at the brothel. Moore said the former basketball player wanted “to get far away from something,” and that, “He didn’t indicate what he wanted to get away from but was adamant he wanted no phone calls, don’t acknowledge he was here, wanted rest and relaxation.” After leaving the brothel to the Love Ranch, owner, Dennis Hof told HLN that Odom spent $75,000 for two women to “take care of any of his needs” for the week. Hof also commented on Wendy Williams that Odom was rushed 20 minutes to a nearby hospital and was to be to flown to Sunrise Hospital in Las Vegas. Unfortunately Odom, who is 6 feet, 10 inches tall, was too big to fit in a helicopter and was driven about 60 miles to Las Vegas by an ambulance.

As details fester about what may have led to Odom’s hospitalization, some reports say that Odom was upset by the way he was portrayed in the Keeping Up with the Kardashian’s episode that aired Sunday night. Florence Odom, the former NBA star’s 89-year-old grandmother, commented that she believes the pressures of celebrity could have taken their toll on her grandson and that she is devastated her disabilities are keeping her from being at her grandson’s side. However, by Odom’s side are his two kids, Destiny Odom and Lamar Odom Jr. , who released this statement: “Thanks for your outpouring of prayers and support for our dad. We are here with our family and friends. We appreciate everyone respecting our privacy at this time. We ask for your continued prayers.”

Khloe Kardashian is said to be making medical decisions

Although Khloe Kardashian and Lamar Odom signed divorce papers this year, the divorce has not been finalized and has left her making the medical decisions. Both sister, Kim Kardashian, and mother, Kris Jenner, have been at the hospital since Tuesday night despite their previous concerns of Odom’s behavior. Kourtney Kardashian shared a photo of Odom hugging one of her children on her Instagram and captioned it ,”Believing in the power of prayer for this beautiful soul.” Likewise, Khloe Kardashian’s brother, Rob, who at one point shared a close relationship with Odom expressed his support on Instagram with a picture of the two of them captioned, “Praying nonstop for my Brother!!”

In a recent report by TMZ, Lamar Odom’s condition has deteriorated, and doctors are now telling the family the longer he remains in the condition he’s in the less likely it is that he will recover. While sources told TMZ that Lamar did indeed squeeze Khloe’s hand Wednesday night, doctors are saying it well could have been an involuntary movement. On Wednesday doctors gave Lamar a 50/50 chance of pulling through. As of Thursday morning, Lamar has shown no signs of consciousness or improvement.

A difficult year for Lamar Odom

Khloe Kardashian and Lamar Odom’s relationship has been rocky for many years. Just recently, TMZ reported that Odom ambushed her way into SoulCycle in Beverly Hills. TMZ then followed up with Odom who stressed that “he absolutely did NOT ambush Khloe Kardashian — and he’s heartbroken because he says Khloe knows what really happened, but … for some reason … won’t go public to clear his name.”

Sangouthai dad, Guillermo Castillo, told The News in an exclusive phone interview that Odom and Sangouthai were so close that “They wouldn’t even go to the bathroom without asking the other. They couldn’t live without each other.” He also said, “I think Lamar is done. I think most of it is because he missed my son so much. I think deep inside they had a death wish, or a wish to die together.”

It has been a tough year for Odom, his family and his friend. One can only hope his troubled past gives him a chance to start over.