K. Michelle and Tamar Braxton Share a Palm Tree and a wig. 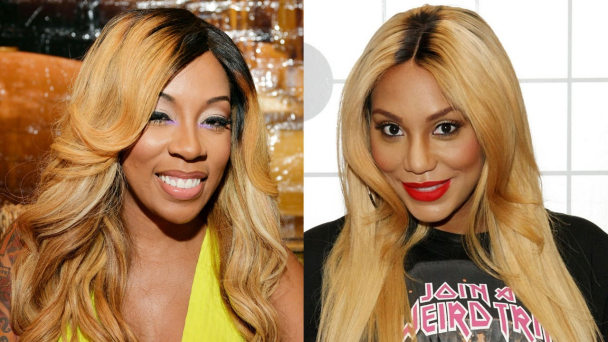 If you watched the BET Awards then you saw K. Michelle and Tamar Braxton’s shady attempt to bury the hatched. I don’t know what was more distracting: Tamar’s facial expressions, K. Michelle huge new butt or the vocal issues all together. Either way, Black twitter had no chill and turned the whole fiasco into a puppet show. While the duo has been entertaining us for a few years, it’s worth it to dig up the past before we nail the coffin.

This all started in June of 2013 when K. Michelle revealed that she was abused by former lover, Memphitz, in the premiere of Love & Hip Hop: Atlanta. Although she never mentioned Memphitz by name, people (including Tamar) quickly figured out who the said “guy” was. Tamar is a friend of the wife of the accused woman beater and naturally went in to save her friend via a twitter: “Oh have fun and let this girl sell her fairytale.”

K. Michelle had a rather elongated response to Tamar’s subliminal tweet.

”She was on Twitter last night [and] she deleted the tweets because she knows she doesn’t want it with [me]. She better stay over there with ‘Family Values’. She deleted the tweets because people were tweeting me what she said. She was saying to Toya ‘Oh have fun and let this girl sell her fairytale’ and all I tweeted was that ‘I like Toni anyway,’ because I do. You know me, I don’t mess with anybody until they mess with me and I don’t play them little games. I’m from Memphis, we jump gates! We don’t play in them little games. So until the muppet gets it together she needs to stay away from me.”

#Pause, Let’s see what Mephitz had to say 0_O 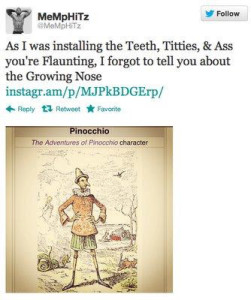 I can’t. So then there was the wig…

Tamar is known for her blonde wigs (the reason she wears them requires its own blog post), and she wasn’t having it when K. Michelle wore a similar wing on BET’s 106 & Park. During K. Michelle’s appearance, Tamar tweeted the below response: 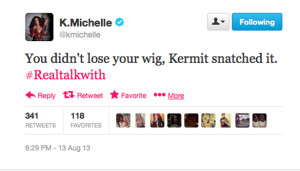 K. Michelle responded by saying, “I’m in a positive place but I ain’t no punk!!! Don’t come for a G. Now let me go to the boys and girls club and talk to the kids.” K. Michelle went one step further  and uploaded an image on Instagram  of Tamar’s sophomore album, Love & War and even purchased the album encouraging others to do the same.

But it all gets a little psychotic when Tamar explains her side of the wigs story in detail.  She even refuses an apology:

“There’s nothing going on with me and K.Michelle. I didn’t ‘at’ anybody. I really wasn’t talking about her. I was talking about the wigmaker whom she stalked to get her wig made by the same person [as me]. And that’s fine, he makes great wigs. People have to be exposed for the lies they tell. I’m not that girl who has to be the Beyoncé of the situation, meaning I don’t have to be the superstar. I’ll go on stage and do my thing and gracefully go home and play with my baby. I don’t have a problem with that. But, that didn’t happen. As a matter of fact, she went on stage and then she came out and watched my show. So I don’t know where that came from, but I’m so grown, If I have something to say to you, and I’ve proven this on every last one of my shows, I will say it to you.”

But it ain’t over until Tamar sings…

“And she actually offered to call me and apologize to me because she was like it was blown out of proportion. And she knew that’s not where it came from because we made an attempt to tell Mona that’s not where it came from. So she wanted to call me and tell me that she was sorry, but my whole thing was like, ‘You know what, publicly you made this statement about me, so publicly you should apologize to me. So she hasn’t done that.”

On Power 105.1’s morning show “The Breakfast Club” and The Arsenio Hall Show, Tamar put life into this fueled. Tamar told Arsenio, “Who? K Mart, where they sell Nicki’s clothes at. That’s the only K, I know.” K. Michelle noted that for someone who says they’re being bullied, Tamar sure has a knack for the verbal jab.

It all doesn’t make any sense. Tamar started the drama with a questionable tweet. Jumping gates K.Michelle apologizes for the wrong interpenetration and Tamar  refuses to accept it because it wasn’t said publicly. Did Tamar need a press release? 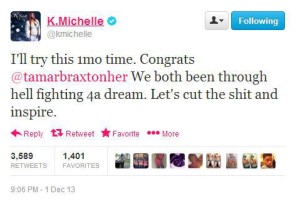 If you watch the Braxton Family Values then you know Tamar is well documented for being difficult to get along with. If anything, she plays the victim and asks for apologizes more than she gives them. When she does give them, it’s a dramatic episode and not heartfelt. While K.Michelle tried  to kill the beef so many times, Tamar refused.

In the emotional clips below, Tamar cries about being bullied but it’s not like she doesn’t play hardball. You simply cant be outspoken and cry when someone pops back at you.

But let’s not shut it down yet. Shall we look at another battle:

“Anyone signed to atomfactory,” Tamar wrote. “I mean how far did u think THAT was going to fly.” 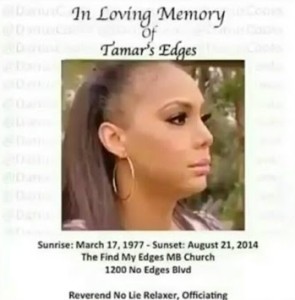 “Looking out to heavens thanking God for everything. This fame stuff is cool sometimes, but the TRUE blessing is that I have all of my edges. Oh, and I don’t have to steal my cable anymore. Laugh it’s good for u.”

Tamar followed up by defending herself and her hairline, writing:

“When u HAVE your baby …(my son) your hair falls out!! Thanks to @simplicityhairoil for my hairline coming back! But if it didn’t work I would BUY me some. Glad you all get to see the changes while #bfv & #T&V on T.V.” 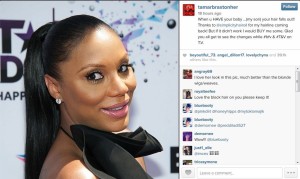 Regardless of what happens. We have to thank the two for many moments of laughter.