Trump Breaks Records But No One Is Clapping 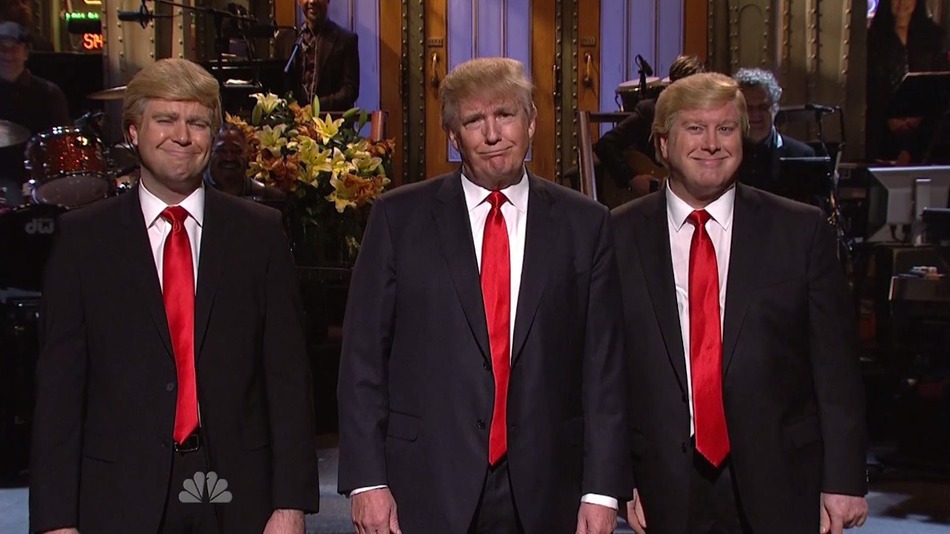 Millennial News—Republican  candidate and business mogul, Donald Trump, hosted Saturday Night Live for the second time since 2004. According to NBC, SNL had a 6.6 household rating on Saturday night, beating the season’s previous high: the 41st season premiere hosted by Miley Cyrus and Hillary Clinton a guest appearance. In fact, Trump’s overnight rating was 47 percent higher than the Miley/Hillary episode. Trump’s episode is said to have delivered close to 10 million viewers, while the season premiere delivered 6.3 million.

The episode poked fun at how the White House would be should Trump win the election. Among many proclamations, the cast commented on Trump tweeting laws and adding the word “huge” to the National Anthem. In one particular skit, the president of Mexico delivered a check for that wall Trump promised along the border. “Consider it an apology for doubting you,” he tells Trump. “Nothing brings two countries together like a wall.”

The episode concluded without raving reviews as critics felt Trump’s performance was mediocre and boastful. The unfortunate grievance is that Trump used this opportunity to re-hash old battles, specifically one with Rosie O’Donnell. “She said some things about me that were hurtful and untrue. I said things about her that were mean but completely accurate,” he joked. The show’s writers were also criticized for the lack of humor and casts commitment to their roles.

Trump, who continues to lead the GOP primary polls, is use to major controversy and called Mexicans in the U.S. illegal criminals and rapists. Since his remarks, the Latino community has actively sought to rip apart Trump’s trail blazing campaign. While protesters were able to force NBC to sever its Miss Universe ties with Trump and remove Trump from the Apprentice, NBC did not respond to protesters against Trump’s appearance on SNL.

“If I went on national television and said something like that about Caucasians, I can assure you no one would ever invite me back to SNL,” Bailon, referring to Trump’s rhetoric, said. “I probably wouldn’t be allowed to do very much of anything. I’d probably be blacklisted. We need to do better as a society and pay attention to the things we tune into and what we applaud and what we’re pushing,” she said.

The only things Trump had to tweet was, “Thank you to all of those who gave me such wonderful reviews for my performance on @nbcsnl Saturday Night Live. Best ratings in 4 years!” Whether or not you like Trump, he makes people tune is. From a business perspective, they call it “just doing business.”