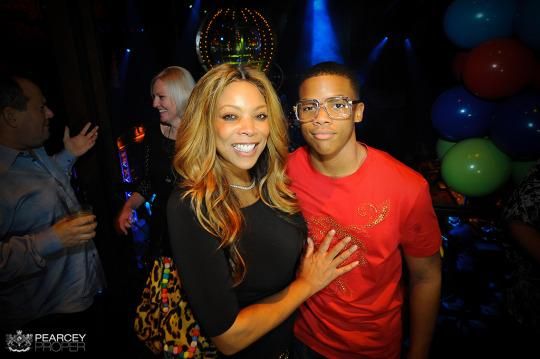 Whether it was weighing in on hot topics or poking fun during her comedy tour, talk show host, Wendy Williams has never shied away from saying what’s on her mind. With Mondays debut of her 7th season, Williams makes a shocking revelation and shared details of her traumatic summer.

Williams shared with her audience that she learned her son had been smoking synthetic marijuana. “It’s one of those pens where you don’t see the smoke, and you don’t smell anything. My heart is breaking and my kid could have been dead,” she told her audience. Her decision to be upfront with her own personal hot topics first was courageous considering her own well-known challenge with drug abuse.

Williams lamented on the issue suggesting it was serious and immediately enrolled the 14 year old into a rehab facility outside of the U.S. “We have always kept it real, me and you,” she explained to a shocked audience. “…We didn’t want to pump him with psychiatric drugs and all that other kind of mess. I’m glad to say that our boy is on the good side of good now.” To make matters worse, Williams confirmed that Kevin Hunter, Jr. was introduced to synthetic marijuana by a close loved one that “he looked up to.”

But exactly how serious is synthetic marijuana considering marijuana was recently decriminalized in the nation’s capital, Washington, D.C.

Health US News released an article on the drug which “goes by street names such as “K2,” “Spice” and “Green Giant,” stating that there have been several cases of young men being admitted to the hospital with similar symptoms, all violent and confused and all having one drug testing positive in their system – synthetic marijuana. The report says that the drug is “…not made using just one chemical [it] can be made with nearly 100 different chemicals that are often sprayed onto dried, shredded plant material.” The substance is manufactured in a lab and is typically sold at bodegas or corner stores for about $5.

Overall it’s not natural weed but a man-made synthetic drug that imitates the chemical in pot that gets you high.

Williams explained the reason for telling the world about her son was to inform other families of what is going on with teenagers these days. According to the National Institute of Drug abuse, “some of the compounds found in Spice, however, bind more strongly to those receptors which could lead to a much more powerful and unpredictable effect.” As a drug popular among high school seniors and more specifically boys, parents have very few ways of detecting its drug use.