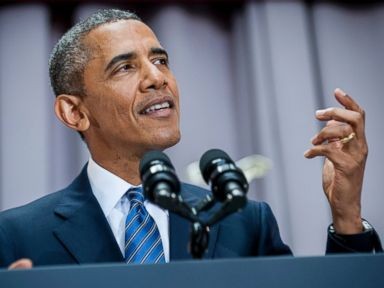 (Millennial News) The Republican presidential candidates were furious with the questions asked during the third debate last week by CNBC’s moderators. The candidates have since boycotted all future NBC News debates and created a list of demands for any media outlets planning to host an upcoming debate — except for Fox News. The first Republican primary debate was hosted by fox and favored the candidates.

President Barack Obama shared his opinion on the Republican presidential candidates Monday night at a Democratic fundraising event in New York. He commented saying their complaints about CNBC’s debate moderation aren’t an encouraging preview for their governing abilities. “Have you noticed that everyone of these candidates say, ‘Obama’s weak. Putin’s kicking sand in his face. When I talk to Putin, he’s going to straighten out,'” Obama said, impersonating a refrain among Republican candidates that he’s allowed Russian President Vladimir Putin too much leeway.”

While the struggle for a fair debate added a great deal of humor, one candidate in particular “went in” on a moderator during the debate:

QUINTANILLA: Senator Cruz. Congressional Republicans, Democrats and the White House are about to strike a compromise that would raise the debt limit, prevent a government shutdown and calm financial markets that fear of — another Washington-created crisis is on the way.

Does your opposition to it show that you’re not the kind of problem-solver American voters want?

CRUZ: You know, let me say something at the outset. The questions that have been asked so far in this debate illustrate why the American people don’t trust the media.

This is not a cage match. And, you look at the questions — “Donald Trump, are you a comic-book villain?” “Ben Carson, can you do math?” “John Kasich, will you insult two people over here?” “Marco Rubio, why don’t you resign?” “Jeb Bush, why have your numbers fallen?”

How about talking about the substantive issues the people care about?

CRUZ: And Carl — Carl, I’m not finished yet.

CRUZ: The contrast with the Democratic debate, where every fawning question from the media was, “Which of you is more handsome and why?”

And let me be clear.

QUINTANILLA: So, this is a question about (inaudible), which you have 30 seconds left to answer, should you choose to do so.

CRUZ: Let me be clear. The men and women on this stage have more ideas, more experience, more common sense than every participant in the Democratic debate. That debate reflected a debate between the Bolsheviks and the Mensheviks.

And nobody watching at home believed that any of the moderators had any intention of voting in a Republican primary. The questions that are being asked shouldn’t be trying to get people to tear into each other. It should be what are your substantive positions…

QUINTANILLA: OK. (inaudible) I asked you about the debt limit and I got no answer.

CRUZ: Let me tell you how that question…

CRUZ: Let me tell you how that question…

HARWOOD: Senator Paul, I’ve got a question for you on the same subject.

CRUZ: … so you don’t actually want to hear the answer, John?

CRUZ: You don’t want to hear the answer. You just want to…

HARWOOD: You used your time on something else.