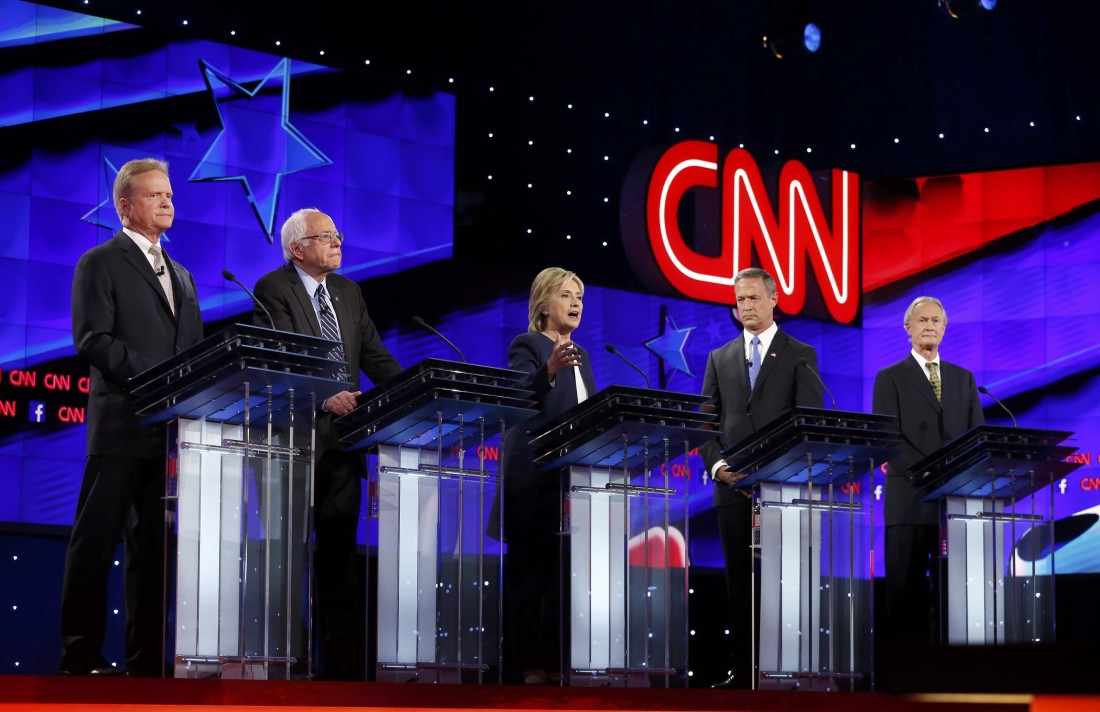 Last night’s first Democratic debate ended with a clear winner— former Secretary of State Hillary Clinton. Others that joined her on the stage in Las Vegas were Sen. Bernie Sanders, former Maryland Gov. Martin O’Malley, former Rhode Island Gov. Lincoln Chafee and former Sen. Jim Webb. But before we dive deep into the details of yesterday’s debate, let’s figure out who in the world is Lincoln Chafee and when did he enter the race.

Former Rhode Island Gov. , Lincoln Chafee introduced himself during last night’s debate as“ the only one running for president that has been a mayor, a United States senator, and a governor.” Quite an impressive track record but moderator, Anderson Cooper, didn’t hesitate to question Chafee’s evolving political career: “When you were senator from Rhode Island, you were a Republican. When you were elected governor, you were an independent. You’ve only been a Democrat for little more than two years. Why should Democratic voters trust you won’t change again?” Even Chafee’s biggest competitor Hillary Clinton received both laughter and an applause when she responded No to commenting to Chafee’s comments toward her email scandal. The cherry on top certainly is Chafee admitting the real reason why he left the Republican party: “The party left me.”

For our last inquiry on Chafee, he announced his presidential campaign in June clocking in at consistent “about” 1%. News reports label former Sen. Jim Webb as the loser, but that’s only because they don’t t acknowledge Chafee as viable candidate. Eric Levenson from Boston.com writes in an article “We already knew Lincoln Chafee was nobody’s choice for president –literally, nobody– but the former Rhode Island governor and senator managed to unperformed even that low bar in last night’s Democratic debate.” But wait for it. The Washington post had the best dig of them all with an article titled, “How to disappear completely, by Lincoln Chafee.” I understand the Democratic Party doesn’t have an army of candidates like the Republicans but O’Malley and Webb are enough light.

The most obvious question circling the room was during the debate was former Secretary of State Hillary Clinton ’s wishy-washy character flaw. Moderator, Anderson Copper, ask Clinton three times if she will say anything to get elected. In Copper’s final attempt, he asked, “Just for the record, are you a progressive, or are you a moderate?” Clinton responded, “I’m a progressive. But I’m a progressive who likes to get things done. And I know…” and she continued “how to find common ground, and I know how to stand my ground” and continued.

Hillary Clinton’s tenacity set the debate on a solid start, the next topic of discussion was Sen. Bernie Sanders. Anderson Copper asked Senator Sanders, “A Gallup poll says half the country would not put a socialist in the White House. You call yourself a democratic socialist. How can any kind of socialist win a general election in the United States?” Like his opponent Clinton, Sanders goes off on a tangent commenting “ I think we should look to countries like Denmark, like Sweden and Norway, and learn from what they have accomplished for their working people.” Sanders didn’t quite answer the question which led him into a hotter seat. Cooper asked, “You don’t consider yourself a capitalist, though?” Sanders commented, “I believe in a society where all people do well. Not just a handful of billionaires.”

A reoccurring theme was Clinton’s inability to keep quite. She jumped into the conversation adding, “I think what Senator Sanders is saying certainly makes sense in the terms of the inequality that we have. But we are not Denmark. I love Denmark. We are the United States of America. And it’s our job to rein in the excesses of capitalism so that it doesn’t run amok and doesn’t cause the kind of inequities we’re seeing in our economic system.”

Now it’s time to hear from at the 1% and below.

Copper asked former Maryland Gov. Martin O’Malley, “The current top prosecutor in Baltimore, also a Democrat, blames your zero tolerance policies for sowing the seeds of unrest. Why should Americans trust you with the country when they see what’s going on in the city that you ran for more than seven years?” O’Malley doesn’t speak on the issue itself but rather he barged the few good results that came from many bad decisions. Cooper hit O’Malley with a heavy puncher asking, “In one year alone, though, 100,000 arrests were made in your city, a city of 640,000 people. The ACLU, the NAACP sued you, sued the city, and the city actually settled, saying a lot of those arrests were without probable cause.” O’Malley responded regretfully saying, “Look, none of this is easy. None of us has all the answers. But together as a city, we saved a lot of lives. It was about leadership. It was about principle. And it was about bringing people together.” Clearly O’Malley didn’t truly accomplish such goals looking at the city of Baltimore today.

While everyone is calling former Sen. Jim Webb the loser, as an African American, I appreciate the solid response he gave when asked, “In 2006, you called affirmative action “state-sponsored racism.” In 2010, you wrote an op/ed saying it discriminates against whites. Given that nearly half the Democratic Party is non-white, aren’t you out of step with where the Democratic Party is now?” He appropriately commented, “[A]s a clarification, I have always supported affirmative action for African Americans…What I have discussed a number of times is the idea that when we create diversity programs that include everyone, quote, “of color,” other than whites, struggling whites like the families in the Appalachian mountains, we’re not being true to the Democratic Party principle of elevating the level of consciousness among our people about the hardships that a lot of people who happen to be have — by culture, by the way.” If you haven’t study indigenous people in the U.S, then you will be surprised what’s hiding the cervices of America.

Who do you think stayed the coolest in the hot seat?

The real debate begins after Cooper dishes out everyone’s dirty. Topics from gun control, immigration, foreign policy, black lives matter, college tuition and other were discussed. You can read the full transcript here. Be on the lookout for a follow up article highlighting the oh so hilarious Jim Webb.