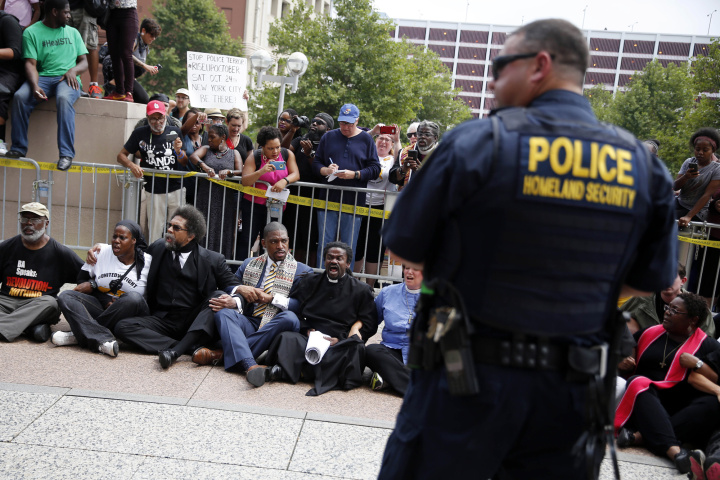 Ferguson, Missouri – The people of Ferguson railed Sunday night on the one year anniversary of Mike Brown, an 18-year-old black man, fatally shot by  a white Ferguson police officer. The night fell ill after a successful day of protest when a friend of Brown and now suspect opened fire at a police vehicle. The 18-year-old suspect, Tyrone Harris, is said to be critically injured but faces charges that include four counts of first degree assault on law enforcement in the first degree, according to the St. Louis Post-Dispatch.

The protesters reassembled the following Monday blocking off streets, chanting, beating drums, and carrying signs. Monday’s demonstrations were part of a planned event hashtag-ed #MoralMonday. It is said that demonstrators received nonviolence resistance training for their planned day of civil disobedience before arriving in front of the courthouse. Activists marched from Christchurch Cathedral to the Thomas Eagleton Federal Courthouse.

The peaceful event took at turn as officers quickly began to make arrests as some rowdy protesters threw frozen water bottles and debris. According to West Florissant Avenue, county police spokesman Shawn McGuire, almost 60 people were arrested around midday Monday for blocking the entrance to the federal courthouse in downtown St. Louis. Another group later briefly blocked Interstate 70 during the late afternoon rush hour, with an additional 64 arrests.”

Among the multiple protesters arrested were Cornel West, Reverend Osagyefo Sekou, and activists Deray Mckesson and Johnetta Elzie. West has asked the crowd to channel their rage into a plan of action for change. Clergy members joined protester and prayed in front of Thomas Eagleton Federal Courthouse and spread oil on it saying the protesters were anointed.

St. Louis County Executive Steve Stenger declared a state of emergency as tensions continued to increase. Stenger commented in a statement, “The recent acts of violence will not be tolerated in a community that has worked so tirelessly over the last year to rebuild and become stronger.” Many people believe Stenger’s actions were unruly and indicative of the problems Ferguson is facing – when constructive opposition is met with destructive force. “They’re not going to take the street tonight,” Police Chief Jon Belmar told The Associated Press: “That’s not going to happen.”

To many the actions taken by police enforcement were considered harsh and unnecessary. According to McGuire, “There were no shots fired and no burglaries, looting or property damage during the protest along.” Robert White, Pastor of Peace of Mind Church of Happiness commented on CNN’s New Day saying, “There’s been too much work. There’s been too much sacrifice and too much hard negotiation and change that has taken place in this city and in the surrounding municipalities to allow those few moments to be what is the image of Ferguson and St. Louis right now. So it’s so much more greatness that’s going on in this community, and that’s the image that we want to portray.”

The arrested protestors were processed and released “as quickly as can administratively be accomplished by the United States Marshal Service,” U.S. Attorney Richard Callahan said. Terri Dougherty, a U.S. attorney spokesperson, told USA TODAY protesters arrested outside the federal courthouse face charges of unreasonably obstructing the usual use of an entrance and will be fined $125.

Ferguson has suffered decades of brutality and the solution is slowly developing but on the horizon.