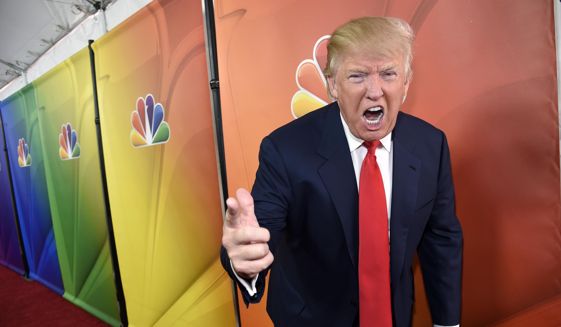 NBCUniversal cuts ties with Donald Trump following in his announces for the U.S. presidency at Trump Tower on June 16, 2015 in New York City. The Miss USA pageant, scheduled for July 12, will no longer air on NBC or Univision, the Spanish-language broadcaster. Hispanic advocacy organizations including the National Association of Hispanic Journalists have put pressure on Peacock network to end the pageant airings due to comments Trump raciest comments.

Trump and NBCUniversal share ownership of the Miss USA and Miss Universe events. “At NBC, respect and dignity for all people are cornerstones of our values,” the company said in a statement. “Due to the recent derogatory statements by Donald Trump regarding immigrants, NBCUniversal is ending its business relationship with Mr. Trump.”

Since being dropped by the two broadcaster, Trump has not wavered and is content with his recent comments on Mexicans: “If NBC is so weak and so foolish to not understand the serious illegal immigration problem in the United States, coupled with the horrendous and unfair trade deals we are making with Mexico, then their contract violating closure of Miss Universe/Miss USA will be determined in court.”

Trump continued by saying, “They will stand behind lying Brian Williams, but won’t stand behind people that tell it like it is, as unpleasant as that may be.” Former news anchor, Brain Williams, was suspend without pay for six months in light of embellished details of his reporting exploits in February. Williams’s suspension ends in August

CEO of NBCU Steve Burke said, “As you would imagine this was a difficult decision. Brian Williams has been with NBC News for a very long time and he has covered countless news events with honor and skill,” and “As I said in February, we believe in second chances, and I am hopeful that this new beginning will be good for Brian and the organization. This matter has been extensively analyzed and deliberated on by NBC. We are moving forward.”

Trump’s arguments remains simple, and others may question NBCUniversal creditability after letting Williams stay with the company.

NBCUniversal is also in the process of “re- evaluating” Trump role as the face of “The Apprentice.” The network will not cancel “Celebrity Apprentice” but is seeking other solutions to replace Trump as the host.

Last season of Celebrity Apprentice resulted in NBC adding two more episodes to this season. With NBC , fourth in ratings and Univision , fifth, the two will have to strategize a way to make up the different that could mean millions.