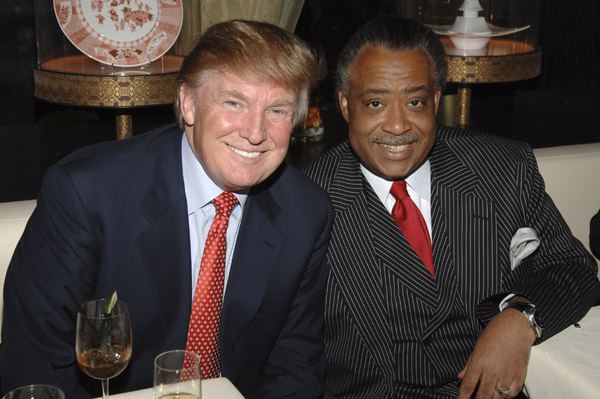 In a recent poll by NBC News/ Wall Street Journal, Republican presidential candidate Donald Trump is still leading the GOP primary with 19 percent. But after his profound remarks toward Mexicans, who exactly are these people stimulating Trump’s blazing campaign trail? While we cannot say with certainty exactly who these people are, there is another group of voters under subliminal attack in Trump’s recent interview with NBC’s Meet the Press.

NBC’s Chuck Todd asked Trump for his stance on black lives matter:“The latest shooting of a white police officer shooting an unarmed black man. Do you see this as a crisis in America?” Trump’s response lacked any regard to the issues fueling racial tension in Black America as he commented saying, “And some horrible mistakes are made. At the same time, we have to give power back to the police because crime is rampant. And I’m a big person that believes in very big– you know, we need police.” Trump told China we’re taking our jobs back. Mexico, they’ll build a border and called out his republican friends for running campaign led by lobbyist. However, he conformed on the greatest issue in the black community—police brutality. To Trump, the killing of an unarmed black man is merely a “mistake” easily corrected by giving officers back their power. Yet, with confidence, he say I will win the black vote.

The topic of black lives matter has been a divided social construct. Presidential candidates Hillary Clinton, Martin O’Malley, Bernie Sanders and Jeb Bush have all come under attack for their lack of sensitivity and acknowledgment of police brutality toward African- Americans. Former President Bill Clinton’s recently publicly apologized for a law he implemented in 1994 that resulted in a massive incarnation of black people. In a speech to Philadelphia’s N.A.A.C.P, Mr. Clinton admits that he signed a bill that made police brutality worse, “But in that bill, there were longer sentences. And most of these people are in prison under state law, but the federal law set a trend. And that was overdone. We were wrong about that.”

Trump argues his campaign is built on a foundation of authenticity but remains blind to black racial profiling and strategic oppression. His solution to the problem is to make things worse by increasing policing: “And we need protection. Look, I look at some of the cities. You look at Baltimore. You look at so many different places in this country. Chicago. Certain areas of Chicago. They need strong police protection. And those police can do the job. But their jobs are being taken away from them.” This is the same person who criticized President Obama two days ago for not fixing “ black people” problems, “I think that he has set a very poor standard. I think that he has set a very low bar. And I think that it’s a shame for the African-American people.”

In a second attempt to get a straightforward response, Todd asked Trump “Do you understand why African Americans don’t trust the police right now?” Trump responded by saying, “We have to give strength and power back to the police. And you’re always going to have mistakes made. And you’re always going to have bad apples. But you can’t let that stop the fact that police have to regain some control of this tremendous crime wave and killing wave that’s happening in this country.” Again Trump does not answer the question but takes another opportunity to reinforce his support of increased policing in cities populated by minorities.

An analysis of public records, local news reports by the Guardian, it is reported that 32% of black people killed by police in 2015 were unarmed, as were 25% of Hispanic and Latino people, compared with 15% of white people killed. It is disturbing that Trump does not see any a problem and his disregard to the issues in the black community poses a great threat to the state of our union. As a result of such statistics, there is a new kind of Black American being birthed. They are ruthless, uncooperative and just plain pissed off not at racial profiling, but something much bigger –white supremacy.

But that’s for another blog…