Today is a very great day as we continue to celebrate last nights big win. 25-year-old, Kara McCullough, from the wonderful District of Columbia brought home the Miss USA crown for a smashing back to back win. Kara was asked by backstage host, Ashley Graham, if she felt the pressure to win the crown and she responded saying — she didn’t feel pressured but honored and why not bring it home back to back as drake said. (Yes, this dope chick quoted Drake on live television!)

I had the pleasure of competing with Kara in 2015, the year Deshauna Barber won Miss DC. On that night, Kara left as a humble two time first runner-up and went on to winning the crown in 2016. My impression of her as we stuffed our faces with salmon burgers was “wow, how can a girl this beautiful be so humble and down to earth?” That was my first (and last lol) pageant and everything you hear about the pageant world is true.

It is very expensive to compete in pageants and if you’ve been around pageant girls then you know many of them are privileged. With that privilege comes, in my opinion, an unrealistic way of being, thinking and doing. Each girl is one woman for themselves once the curtains open but not Kara. That is why she won.

Kara did give conservative answers to questions given to her by the judges —she said  wasn’t a feminist and that she thought people need to have a job to have health care. Critics quickly took to social media to express their concerns calling the new Miss USA chemist, uneducated and not a supporter of women.

However, supporters of Kara such as Kristin Tate commented on “Fox & Friends” this morning saying “Kudos to these Miss USA judges who crowned her and celebrated true diversity,”  It was refreshing to see McCullough win because she represents an often overlooked type of diversity: diversity of thought.

It was refreshing to see McCullough win because she represents an often overlooked type of diversity: diversity of thought.

When I look at Kara, I see a beautiful woman that little girls can look up to. Not because she looks perfect, but rather she is humble, smart and beautiful. Life is about the way you handle adversity with grace. It about trusting God without any shadow of doubt and knowing that every loss comes with a future win. It’s about losing enough times that your opponent becomes the one to crown you.

It’s about losing enough times that your opponent becomes the one to crown you. 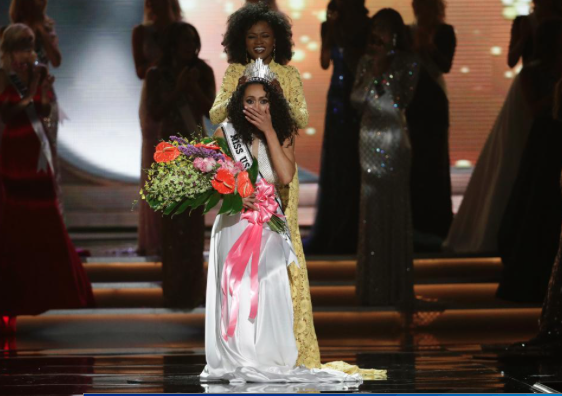 I had aggressively been checking out Kara’s competition and in the end, I couldn’t find another girl like her. With those curly ringlets and full of character responses,  I knew she had to win. We had to win.

Black girl magic is explosive in 2017 and I cannot wait to see our Miss USA compete in the Miss Universes pageant. Job well done.