The Real Housewives of Potomac May Be a New Hit!

I am sure inquiring minds question why Potomac has become the latest destination for the Real Housewives franchise. But this small, upscale and very wealthy enclave located just up the river from Washington, D.C. is filled with gated mansions and exclusive country clubs. The Real Housewives of Potomac is scheduled to air in January and will introduce six new Housewives: Gizelle Bryant, Katie Rost, Karen Huger, Charrisse Jackson-Jordan, Robyn Dixon and Ashley Darby.

Montgomery County, located in Maryland and includes Potomac, is pretty wealthy in general. However, Potomac is home of the uber-wealthy like billionaire Dan Snyder, owner of the Washington Redskins In fact, Forbes described Potomac as a bedroom community for lawyers, doctors, scientists and executives who work in D.C.Only 2.5% of the population didn’t finish high school and 78.6% has a bachelor’s or graduate degree.

The most obvious questions is why the entire cast is black.

The 2010 census reported Potomac’s demographic as being 75.8% White, 4.6% African American. Sure, they have a bi-racial cast member but Potomac is a predominantly white, highbrow community. The only explanation I could come up with is that “real” Potomac residents don’t want to join a show such as the real housewives. For the most part, Potomac has been a well kept secret for a reason.

But as they always say, money can’t buy you fame.  Yet, Bravos’ housewives franchise brings more than just fame. The Real Housewives Of D.C. was short lived experience but still managed to have a %100 divorce rate. The overall divorce rate for all of the franchises is 37.5 percent. If you’ve watched the various shows than you know Shannon Beador almost made the list and Cynthia Bailey many be next.

So let’s get to know more about this cast. 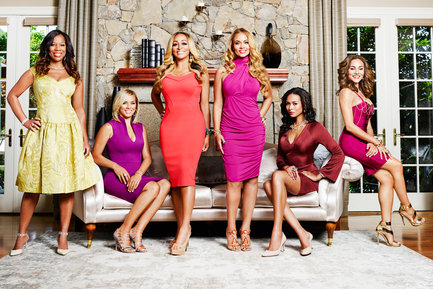 Gizelle Bryant : After graduating from Hampton University, she married megachurch pastor/activist Jamal Bryant and lived in Baltimore in wedded bliss for seven years. But when the marriage came crumbling down on her, this resilient woman decided it was time to move back to her old stomping ground of Potomac for a fresh start with her three girls.

Katie Rost : Katie went on to marry her college sweetheart, but the marriage was short-lived and fell apart. She decided to move her three-year-old son, James Rocco, and 14-month-old twin daughters, Kathryn and Renee, back to Potomac to settle down and raise them “properly.” A single mother of three, Katie was introduced to one of Potomac’s most eligible bachelors, Andrew, an investment executive.

Karen Huger : Although Karen is known for throwing over-the-top parties at her home, her family always comes first, and she is extremely proud of all that they have accomplished. Raymond, her husband of 19 years, a technology entrepreneur, is president and CEO of a highly successful information technology company.

Charrisse Jackson-Jordan : Charrisse has been married to NBA player-turned-coach Eddie Jordan for more than 18 years. The secret to their marriage is distance: for the last three years of their marriage, they have lived apart. Eddie currently resides in New Jersey while Charrisse and the children live in Potomac. The couple has faced its share of relationship challenges, but Charrisse tackles any obstacle that comes her way with dignity and grace.

Robyn Dixon : Robyn was in high school, she met Juan Dixon, a star athlete at a rival school. In what turned into a whirlwind romance, Robyn and Juan became high school sweethearts, attended college together, and eventually married. Juan went on to become a professional basketball player; the couple moved to Potomac and had two talented, athletic sons. However, being married to an athlete was not easy, and the couple decided to part ways. Juan now works as a special assistant basketball coach for the University of Maryland, and the couple remains extremely close, so much so they all live together under one roof and are embracing the “new normal.”

Ashley Darby : Ashley met Michael Darby, an Australian real-estate millionaire, who is 29 years her senior. Sparks flew, and Ashley was introduced to a world she never knew existed. After four years of dating, the couple married, and Ashley went from 22 and single to wife and stepmother of Michael’s 21- and 24-year-old children.

At first I thought to myself, this show is going to be a flop but with story lines like these. I cant wait to welcome the shade into Potomac.