Let the race being is what last night’s Republican presidential debate signified as the top 10 Republican candidates went to head to head. While there were some impressive remarks, Former Arkansas Gov. Mike Huckabee and neurosurgeon Ben Carson enjoyed significant turnarounds as viewer’s interest in the two began to peak. Business mogul, Donald Trump admitted he has never debated before and had a mediocre performance as expected. In response to women’s healthcare, far to the left Wisconsin Gov. Scott Walker may have created an unrecoverable set back with his abortion positioning. No candidate raved about Obama more than Texas Sen. Ted Cruz who commented on the President’s inability to be truthful. When it came to hot topics such as immigration, Florida Senator Marco Rubio set the record straight pitching well thought-out solutions to immigration and escape holes dug by El Chapo. For the most part we can say Jeb Bush takes the L with little to report. 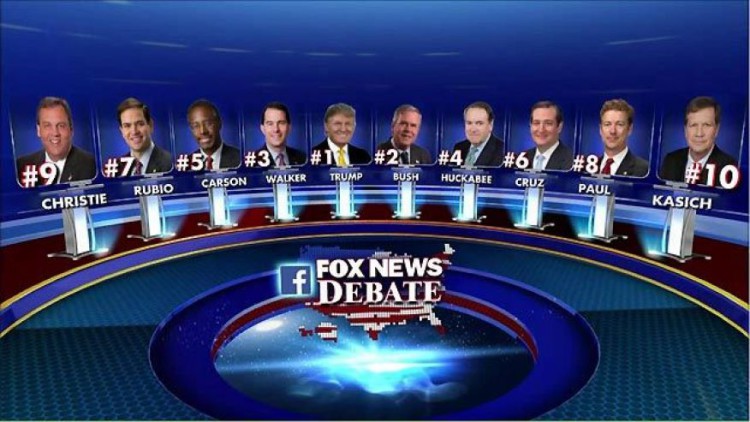 1. Trump was introduced first in the order of the GOP ranking and started the debate in pure controversy. Fox host Chris Wallace asked all of the candidates whether they would pledge to support whoever ultimately won the party’s nomination for president, as well as rule out an independent bid. Trump raised his hand indicating he would not make that pledge and inadequately supported his response saying, “I want to win as the Republican. I want to run as the Republican nominee.” Kentucky Sen. Rand Paul was quick to call him out for opposing the pledge and being an alleged undercover Clinton supporter. Fox host

Megyn Kelly quickly became the butt of a joke after asking Trump about his “disparaging comments about women’s looks.” Kelly opened the question saying, “You’ve called women you don’t like, ‘fat pigs,’ ‘dogs,’ slobs, and disgusting animals.” Trump jokingly replied it was only Rosie . Kelly fired back saying, “You once told a contestant on ‘Celebrity Apprentice’ it would be a pretty picture to see her on her knees. Does that sound to you like the temperament of a man we should elect as president?” Trump agreed he is unpolitical correct and that his comments are often fun, Trump struck the kettle with this shady comment, “And honestly, Megyn, if you don’t like it, I’m sorry. I’ve been very nice to you, although I could probably maybe not be based on the way you have treated me. But I wouldn’t do that.”

When asked about immigration, Trump said reporters twisted his words and that immigrants would not be such a hot topic had it not been for his blunt remarks. In his opposition, Trump found a great opportunity to attack New Jersey Gov. Christie. “I had the good sense to leave Atlantic City, which by the way, Caesars just went bankrupt,” Trump said, then gestured to Christie: “Chris can tell you.”

2. New Jersey Gov. Chris Christie found him in hot water over New Jersey’s questionable economic standing. Christie made light of the situation and blamed New Jersey’s problems on the previous governor. Kentucky Sen. Rand Paul made his biggest debut in a heated argument with Christie over national security. Christie replied yes when asked by the moderator, “Do you really believe you can assign blame to Sen. Paul just for opposing the bulk collection of people’s phone record in the event of a terrorist attack?” This question should have been a dig at Paul who fought parts of the Patriot Act that allowed the government to collect bulk amounts of phone data in an effort to monitor terrorist activities. However, unlike Christie who undermined the GOP in the 2012, Paul used the hug Christie and Obama shared in the aftermath of Hurricane Sandy to reiterate Christie’s disloyalty to the Republican Party. “I don’t trust President Obama with our records, I know you gave him a big hug,” Paul said.

3. Ohio Gov. John Kasich just barely made into the top 10. Kasich overall said demeanor as a prickle governor took a back seat as he avoided a great opportunity to throw a punch a Trump on immigration. Kasich simply insisted that Trump is “hitting a nerve in this country.” With the support of Ohio, an important Republican State, Kasich used his home-field advantage to boost his name-recognition. “I had an opportunity to bring resources back to Ohio, to do what? To treat the mentally ill. Ten thousand of them sit in our prisons, at $22,500 a year,” the Ohio governor said. “I’d rather get them the medication so they can lead a decent life.” While the crowd cheered, Ohio’s Democrats would argue against Kasich said accomplishments. Kasich continued, “And finally, we went from $8 billion in the hole to $2 billion in the black, we’ve cut $5 billion in taxes –”

Many Republicans did not believe Ben Carson should have made it into the top ten or even entered into the race. Like Kasich, Carson used the GOP debate to announce his presence by validating and leveraged the playing field. As a neurosurgeon with no political background, Carson used his medical knowledge to gain a few laughs, “I’m the only one to take out half a brain, but if you went to Washington you would think someone had beat me to it.” When asked about race, as key issue in America today, Carson explained that he operates on the “things that make us who we are,” not skin. Viewers might not have been ready for Carson’s bluntness who commented that “If Hillary is the candidate, which I doubt, that would be a dream come true.” He said added, “The fact of the matter is, she is the epitome of the secular progressive movement, and she counts on the fact that people are uninformed, the Alinksy model, taking advantage of useful idiots.” Many viewers have overlooked this statement as the other candidates expressed greater disdain.

4. Former Arkansas Governor Mike Huckabee is certainly a fire crack. Of the six opportunities he had to speak, Huckabee wasted no time getting straight to the point in the areas of abortion; pimps and hoes; and villains of the nature world. While the other candidates used Plan Parenthood in their debates, Huckabee took the extreme route and suggested giving unborn babies their full rights to the bill of rights:“I think the next president should invoke the 5th and 14th amendments to the Constitution.” For the “freeloading” pimps and hoes out there, Huckabee advocated a “Fair Tax” that collected on consumption of goods and services. He commented that the plan would be “paid by everybody, including illegals, prostitutes, pimps, drug dealers–all the people that are freeloading off the system now.”Watch Full Movie Online Streaming Online and Download

5. Huckabee’s outrageous comments continued in the nick of time before Caitlyn Jenner’s first episode airs. Huckabee comments on transgender military personal saying “is not a social experiment.” To Huckabee, “The purpose of the military is to kill people and break things. It’s not to transform the culture by trying out some ideas that some people think would make us a different country and more diverse.” He added, “I’m not sure how paying for transgender surgery – for soldiers, sailors, airmen, Marines – makes our country safer.”

According to CNN, this debate was the highest rated primary debate ever, pulling in 24 million viewers. The question that has yet to be unanimously answered –who won?