0  0
Are you made or nah ?  I don’t know if we should be taking what Donald Trump says all too serious. He is provocative and certainly an instigator. If anything what he brings to the elections process is comedic relief. Real comedy is offensive and as a country, I think can stand to laugh at ourselves a bit. Let’s leave the mexicans alone and see what else Trump has had to say over the year. 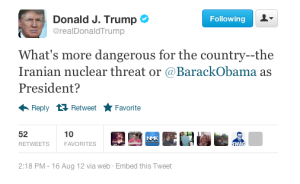