The Food Prints of Kim Kardashian in Paris 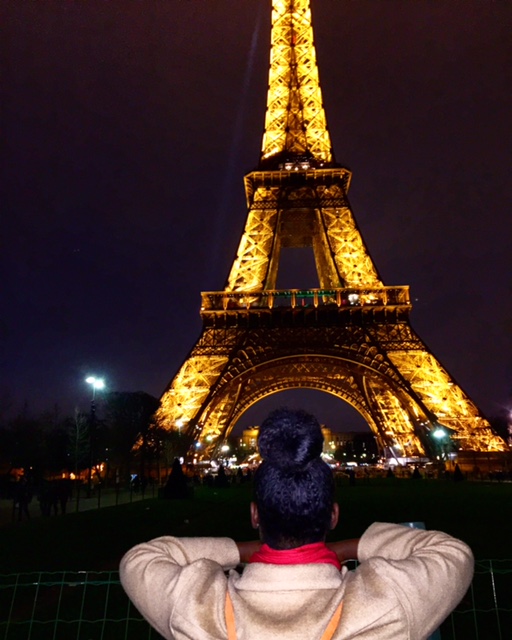 In this season of Keeping Up with the Kardashians Kim jetted off to Paris to fulfill her pregnancy cravings. I’m so not pregnant but I knew Kim’s taste in food would be just as fabulous as her taste in fashion. And as a committed fan, I longed to following the food prints of Kim in Paris. Before I knew it, I was booked a ticket to spend four days in Paris. Of course the only plan on my agenda was to eat like Kimberly.

My first stop was L’Avenue where Kim and Kanye West hosted their anniversary lunch. I ate there for lunch on Friday and the place was packed. When I asked for a seat the gentleman told me the only seating available was outside. My first instinct was to be highly offended that he’d think I’d be ok eating such an expensive meal in the freezing cold. I understand it’s something Parisian do but it doesn’t make any sense. The waiter then took me upstairs to sit a bar. And as I sat down I thought to myself again, who does this lady think I am to put me at the bar when I am about to paying for this expensive meal.

After requesting a seat at a table again, I was magically given a nice table perfect for people watching. To the right of me were two gentlemen in the fashion industry. To the left was a couple I could tell had a long lunch date by the empty bottle of wine. I watched noticeably as many the separate guest parties greeted each other. I asked the two gentlemen to my right if they frequent here often and is that why they knew everyone. Like a true Parisian, he gave me a smirk before acknowledging I had spoken. 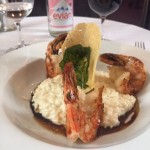 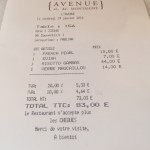 My meal was pretty amazing! I order the shrimp risotto for 44 euros. But I was most impressed by the peanuts, olives and bread that came as a free starter. I never got to the peanuts because the waiter swiped my table clear in the middle of me snacking to place my meal. If I was home, I would have said, “excuse, excuse… I don’t recall saying I was done.” For 84 euros I’m eating everything and taking the plate home as a souvenir.

On Saturday, I went there again for a reason I’ll explain later. I only mention it to say the serves and food was half the quality. I didn’t get any free snacks, they only had dry hard bread and the lady took forever to check on me in a place nearly empty. I don’t think I’ll come here gain especially when the next place I went was to die for.

Kim mentioned how much she loves Ferdi’s churros. Ferdi’s was reasonable prices so I ordered their famous burger and mac and cheese. I promise that mac and cheese will make you want to kiss the chef. I stopped half way through my meal to save room for the churros. I requested a take a way and I couldn’t believe they don’t offer them. In front of me were half of my burger and half of my mac and cheese that I couldn’t let go to waste. In the nick of time some random guy from London helped finish my meal to a point where I was pleased to let it go and then the churros came. Those little crispy things were great but I was still dreaming about that mac and cheese. This place is very small but a place one must entrain. I only wish I had gone there a few more times because it was absolutely finger licking, foot in the pudding good. To my American readers, don’t expect your meal to come with a side of anything. The burger was alone was 15 euros. 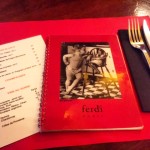 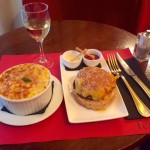 Mac&Cheese and Burger at Ferdi’s 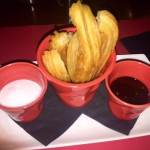 The famous churros at Ferdi’s

Now I saved the best for last- Hôtel Costes. I spent three hours getting ready to enjoying what Kim called the best cheese cake ever. I made sure to look really good because this place did not look like it was going to be cheap. As I get close to the restaurant I see very expensive cars and I think to myself “aw crap my fancy isn’t even fancy enough.” I walked passed a window covered in fresh roses that I wanted to take a picture of but two fine looking gentlemen were holding the doors open for me. 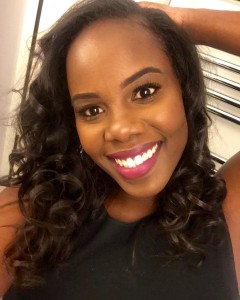 I walked into this very dark Casablanca vibe of a room packed to capacity. When I saw the people in front of me leave because they didn’t have a reservation, I made an about-face turn as well. On my way out I managed to snag a parting gift with the reservation number (+33 1 42 44 50 00) on the back. Thank me later if you actually make it into this place but book early for Saturday night. I’m sure they filter the guest list so that basic people don’t come in.

Well, there you have it folks. You don’t have to be a celebrity to eat like one! Hope you follow my next Kim food prints to Dubai in April !