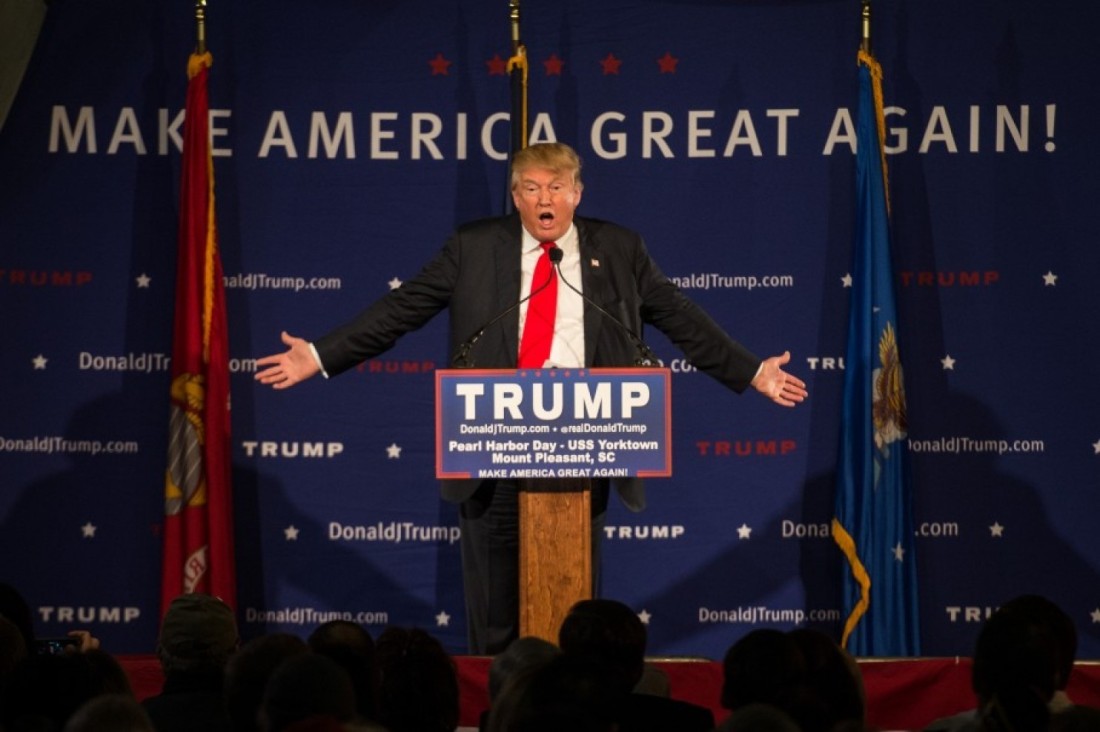 The lack of support from the Republican party has Trump wanting to disown them altogether. Trump’s tweet on Tuesday dangled the idea of an independent run for president and it sent a clear warning to the Republican party. Trump is ready to clap back at Republicans like, Speaker, Paul Ryanike who are willing to denounce but not reject Trump’s outlandish proposals. A new USA Today/Suffolk University poll that shows 68% of the 2016 Republican front-runner’s supporters would ditch the GOP and stick with Trump if he launched an independent campaign for the presidency. Trump could very well be pulling the Republicans Party’s teeth but his invaluable implementation of brinksmanship has forced the Republican party to choose it they are willing to lose the White House for the third consecutive term.

“The people, the Republican Party, have been — the people — have been phenomenal,” Trump said Wednesday morning on ABC’s Kelly Ripa and Michael Strahan. “The party — I’ll let you know about that. And if I don’t get treated fairly, I would certainly consider that.” Jeb Bush responded to Trump’s independent run by tweeting perhaps the real estate mogul had “negotiated a deal with his buddy” Hillary Clinton. “Continuing this path would put her in the White House,” Bush tweeted. Regardless of what move the Republicans make, they party needs a serious group huddle.

Trump faced harsh criticism for his proposal to temporarily halt Muslim immigration to the U.S. but the House voted last month to suspend the Syrian refugee program. It is evident that Trump could use a little 101 on presidential rhetoric. Or perhaps not, from the looks of it many Americans appreciate being able to “understand” Trumps ideas because of they lack misleading jargon.

The Democratic party is sure to be enjoying “happy holidays” in the mist of the Republican party’s twitter wars. Now the conversation that has yet to happen is about the Republicans “hush-hush”. So far their attacks on Trump have been constitutional but the premise of his arguments are popular among the conservative’s water cooler talks. Inquiring minds question if the party is using Trump to test their barbaric ideas.

Comments From the Editor:

It’s easy to forget there are 50 states and millions on top of millions of people living in them. But when I am reminded that the season premiere of Duck Dynasty shatters records and I had to ask myself who are these viewers. When I did learn more about the reality show featuring a ‘redneck’ family who make duck calls, I still was not all interested but had to accept there many people out there that are. I make this point to say, that Trump’s supporters are real people who you probably didn’t even know existed.

What I certainly don’t like is the political bullying by government officials who should have more class. South Carolina Sen. Lindsey Graham said on CNN’s “New Day” on Tuesday, “You know how you make America great again? Tell Donald Trump to go to hell.” Honestly, that is not a nice things to say ( as Trump would too say) when Trump leads with more than double the percent among South Carolina Republican primary voters. Yes, Trump was quoted calling the President “stupid” which is an equally poor choice word but that is part of Trump’s branding strategy.

Trump could very well be the next president of the United States. His nominations not only shows us what the people of America think but also shames the government for not being for the people. Trump is not afraid to fight with any of his opponents and I admire that on an internal front because Democrats and Republicans alike are riding on his back.

In fact, Texas has gone to federal court in its efforts to keep Syrian refugees out of the state, filing suit against the federal government and a refugee resettlement nonprofit. AND Texas Sen. Ted Cruz said, “I’ve introduced legislation that would suspend for three years refugees from countries where ISIS or al-Qaida control a substantial amount of territory.”

Please tell me what the difference is between Trump and Cruz’s initiative to ban Syrian refugees. The means to the end doesn’t matter if there will still be NO refugees allowed in. Refugee supports, if you are going to attack Trump, go after Texas as well. Yes, the whole state. I want to see a trending hashtag that says #removeTXvotingrights. Let’s examine the facts people before we go on prejudices rants.

There is a critical demand for voters to understand the game of politics. Both political parties are playing off of Trumps cards thinking he is Pinocchio but who is going to laugh when he wins. I am calling all candidates to get off their butts and speak up because I can’t hear them saying anything different. This time around, there will be no charity votes. There are wars going on in every front and I hardly think Twitter wars are most important as this political campaign leads us to believe.